Sugarland is a Houston suburb located 24 miles south west of downtown Houston in Fort Bend County. It is a self contained city with its own council. Sugarland boasts an amazing town center, First Colony Mall and every amenity you could wish for. The area is made up of attractive master planned communities dominated by single family homes. Parks, golf courses, lakes, trees and some excellent schools add to the appeal. New home construction continues to this day to the east.

Search by subdivision: They include:

Originally farm land, the area was developed into a sugar plantation in the mid 20th century (hence the name). Imperial Sugar had its refinary there. In the early 1970's demand for housing led to the development of a master planned community - Sugar Creek. With stylish housing alongside man made lakes, a golf course and parks, demand for such a lifestyle surged and several more master planned communities followed.

Current population stands at around 87,000 and counting. Sugarland has been one of the fastest growing communities in Texas in the last decade with a 158% increase in population since the 1980's. Many companies call Sugarland home and area job growth rose by 46.24% between 2000-2007. For those travelling into downtown or the Texas Medical Center, the commute in non peak can be around 25 mins but can be 45-60 minutes in peak traffic using the 59. The new 99 makes commuting to Katy, NW Houston and the Woodlands possible. Fort Bend Parkway heads north out of neighboring Sienna Plantation and is a good route for medical center employees living in Riverstone.

Sugarland has a heart - its very own town center - an area filled with shops, cafes and restaurants. Next door is the world class First Colony Mall. Every subdivision has its own set of amenities including parks, neighborhood pool or two, tennis courts. Golf courses and walking trails criss cross the entire area.

To the north of Sugarland lies Missouri City. Sienna Plantation neighbors to the East with Pearland a little further east again. To the west of 59 you'll find the community of Pecan Grove and a growing number of lovely communities line the 99 up towards Katy including Aliana. 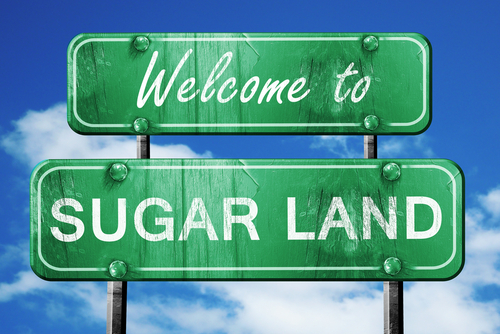 The average home size and price will vary depending on which subdivision you look at but the average price across the entire area is $482,811 with an average home size of 3259 sf. Average rentals are around $2347 per month. Sugarland can be more pricey than Katy as it's that bit closer to Houston.